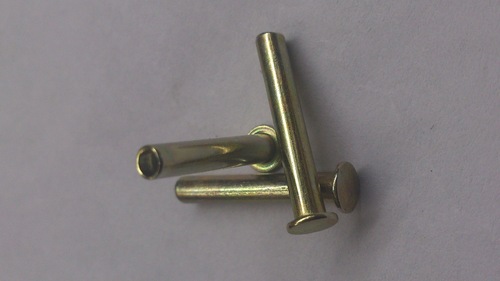 Semi-tubular rivets (also known as tubular rivets) are similar to solid rivets, except they have a partial hole (opposite the head) at the tip. The purpose of this hole is to reduce the amount of force needed for application by rolling the tubular portion outward. The force needed to apply a semi-tubular rivet is about 1/4 of the amount needed to apply a solid rivet. Tubular rivets can also be used as pivot points (a joint where movement is preferred) since the swelling of the rivet is only at the tail. Solid rivets expand radially and generally fill the hole limiting movement. All tubular rivets are waxed to facilitate proper assembly. The finished look of a tubular rivet will have a head on one side, with a rolled over and exposed shallow blind hole on the other. Semi-tubular rivets are the fastest way to rivet in mass production but require a capital investment. Vaishanv fastners currently manufactures M.S semi hollow rivet in M.S , Brass, Copper, Aluminium and SS 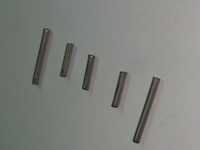